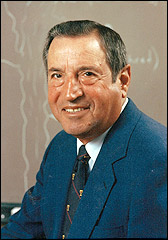 For more information regarding Vincent Petrucci and the university's matching gift announcement, visit Ag One Foundation.

Dr. Vincent Petrucci began his career at Fresno State College in the fall of 1948 after graduating from UC Davis. For the next six years he taught classes at the campus which was situated on a wartime Air Force base Hammer Field before the campus moved to its current Cedar and Shaw location in 1954. Professor Petrucci taught viticulture classes through the Plant Science and Mechanized Agriculture Department for over forty years. His areas of expertise included viticulture, vineyard management and production,and grape varieties.

By 1985, Professor Petrucci became the Director of what became the Viticulture and Enology Research Center. As a Professor of Viticulture and Director of research, his mission was to train and educate students for employment in the grape and wine industry, and to respond to the industry's request for practical research. Before his retirement in 1994, he successfully led two fundraising campaigns to expand the research center facilities and to establish support for research positions, including several student research assistantships.

Petrucci received many awards and honors throughout his career. In 2009, he was awarded the California State Fair's Lifetime Achievement Award for his contributions to the grape and wine industry, and in 2010 was awarded an honorary academician diploma by the International Academy of Sensory Analysis by Dr. Mario Fregoni, Catholic University at Piacenza, Italy.