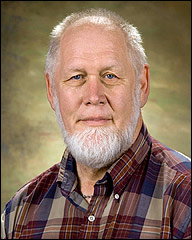 K.C. Fugelsang was a Professor Emeritus of Enology at California State University, Fresno. He joined the university in 1972 and after four decades of service, he began teaching part time for the Department of Viticulture and Enology during his retirement. His primary area of expertise was wine microbiology.

Fugelsang  published over 150 technical papers and 14 books including Wine Analysis and Production. He co-authored the second edition of Wine Microbiology- Practical Applications and Procedures with Charles Edwards of Washington State University. The book received the 2007 Prix d l OIV representing only the second time in the history of the award that an American author was recognized in the field of Oenology.

Ken is the past president of the Honor Society of Phi Kappa Phi and recipient of the University's Outstanding Research, Scholarship and Creative Activity Award the Salgo-Noren and NACTA Awards, the Claude Lavelle Award for Innovative Technology, and the Outstanding Alumnus Award ( Top Dog Classes of 1969 and 1972). During his service to the enology program, Fugelsang also managed Fresno State's 20,000 case commercial winery where his students received over 350 awards in major wine competitions.

His contributions to Fresno State's enology program live on.