(April 26, 2021) -- Dr.  Harry Karle, a plant science professor emeritus and former farm manager at Fresno State, passed away on Friday, April 9, at the age of 94 surrounded by love and family in Fresno.

The Sanger native became an integral part of the Fresno State agriculture family for 75 years through a variety of capacities ranging from student and alumnus, plant science faculty and department chair, associate dean and industry supporter.

A celebration of life event will be be held at Holy Spirit Catholic Church (355 East Champlain Drive) at 10 a.m. Friday, April 30.

In lieu of flowers, remembrances may be made to the:

After growing up on a Sanger area farm, he received Fresno State College’s first viticulture-related bachelor’s of science degree in 1950 under the direction of the program’s legendary founder, Dr. Vincent E. Petrucci.

After graduation he worked one year as an instructor at Sanger Union High School in 1950 (where he had graduated from in 1944), and also worked part-time for the USDA Horticulture Research Station in Fresno. 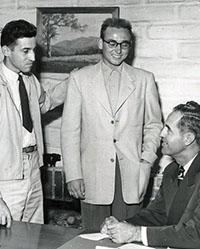 He returned to campus in 1951 as its first vineyard foreman as the program started to grow into a national leader under the direction of Petrucci and George Ilg.

Karle left to start his post-graduate work in plant pathology at UC Davis in 1956, and received a master’s of science degree in 1959 and a doctoral degree in 1965, also from UC Davis. He also served as an accomplished technician in its plant pathology laboratory.

He joined the Fresno State Plant Science Department as an assistant professor in viticulture and plant pathology in 1962. He later served as its department chair from 1969 until 1986 when he assumed the position of Assistant Dean of Farm and Mechanized Agriculture. He was elevated to associate dean in 1987 before his retirement in September 1991.

As the campus farm manager, he welcomed the addition of the Center for Irrigation Technology, which began in 1980. Now celebrating its 41st anniversary, it is internationally recognized for its programs that promote technological innovations and education programs that serve the industry, community and government.

He was one of the founders of the Fresno State Ag One Foundation, which has raised nearly $24 million in endowed scholarships since its start in 1979.

He remained active in the alumni and industry outreach organization through the Turf Day Golf Tournament that he helped start. What began as a plant science department fundraiser and welcomed alumni and industry supporters is now hosted by Ag One and will celebrate its 50th edition in 2021.

Another campus effort he strongly supported was the Vincent E. Petrucci Library, named after his mentor and friend whom he first met in 1948, and one of the nation’s only college libraries dedicated solely to viticulture and enology.

On campus, he served as a faculty advisor for the Alpha Gamma Rho, Alpha Zeta, Viticulture and Enology Clubs, and university committees for campus planning, curriculum, general education, student affairs, financial aid, and the graduate forum and graduate council.

He was recognized with an "Outstanding Teacher Award" by the National Association of Colleges and Teachers of Agriculture in 1968, and included in Who's Who in American Education, American Men of Science, and Personalities of the West and Midwest editions.

His professionally-published articles focused on a wide variety of topics, including yellow bud mosaic virus in almonds and peaches, aerial surveillance of insect and plant diseases, and horticultural education student project importance.

While a faculty member, he was active in numerous organizations, including the American Phytopathological Society, Sigma Xi, Alpha Zeta, National Association of Colleges and Teachers of Agriculture, California Colleges and Universities Faculty Association, California State Employees Association, Agronomy Society of America, and served as the first Vice-President in 1980 (and subsequently as President in 1981) of the California chapter of the American Society of Agronomy.

He is survived by his four daughters and their husbands: Trish and Terry Barclay of Gresham, Oregon; Kathryn and Paul McDougal, Carolyn Karle Kemble and Dan Kemble, Carey Karle and Maurice Bonetto, all of Fresno; his ten grandchildren: Timothy and Angela Barclay, Phillip and Meredith McDougal, Karley, Michaela, and Brianna Kemble, and Ema, Evan, and Eliot Karle Bonetto.

The family thanked the Nazareth House for their exceptional care and support.

(Information collected from an obituary written by the family, personal notes and other sources).