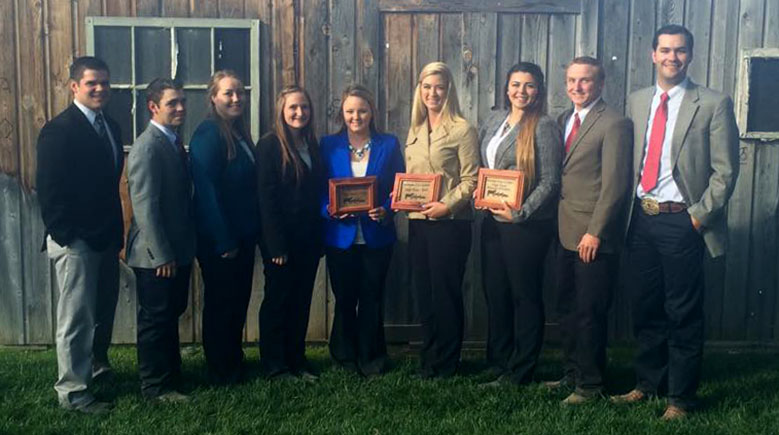 The seven-person also claimed four top-11 finishes in four other competitions against the 33-team field in the categories for performance cattle (fifth), hogs (eighth), reasons (10th) and cattle (11). Senior Danielle Budde was Fresno State’s top individual placer in the overall standings (16th) and also finished fourth in the sheep category.

“We were relatively inexperienced coming into the season,” said team coach Brad Mendes, “but our students worked hard together and achieved their goal of being top 10 at nationals. They pushed each other all year long and were able to improve on an equally noteworthy 11th-place finish last fall against the nation’s best teams.”

Earlier in the fall, the team competed in four events in October, and highlights from each follow.

After a sixth-place team finish at the Texas State Fair in Dallas, the squad placed second overall at the Big Fresno Fair and was led by senior John Traini (first), Sumpter (third) and Budde (fourth).

At the American Royal event in Kansas City, the team placed seventh overall after it finished top 10 in categories for sheep (third), goats (third), cattle (seventh), hogs (ninth) and reasons (ninth). Price placed fifth among individuals in the sheep and goat categories, and John finished 14th overall and three points shy of a top-10 finish.

Other members of the team that competed in fall included seniors Teighler Baugher, Jonathan Rodriguez and Paige Wysong.

More information on the Fresno State Livestock Judging Team is available at its Facebook page .