A Fresno State faculty-student research team has explored a unique combination of technologies in an effort to more efficiently power passenger and farm vehicles across the roads and highways of California.

Industrial technology Professor Daming Zhang and graduate student Hemanth Chandra, along with undergraduate students Mithel Thabit and Matthew Crowder, sought to develop a solar-energy-powered on-vehicle hydrogen generator that would work with a regular gasoline engine to boost fuel economy and reduce emissions. The project featured the new idea of supplementing not the engine, but the hydrogen booster, with solar power.

Prior research has suggested that an appropriate mixture of hydrogen and gasoline can raise the combustion efficiency in a normal car engine and reduce emissions because of lean burning, Zhang said. However, the data is relatively sparse. The challenge for the professor and students was to develop and test a hydrogen booster on a donated 1996 Nissan, and then develop a solar panel that would power the hydrogen booster. 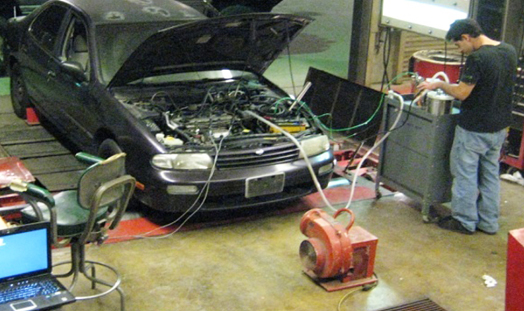 “The Central Valley is an agricultural region with thousands of agricultural vehicles and devices working under excessive sunshine every day,” Zhang said in outlining the research hypothesis. “The electricity needed in generating hydrogen can be obtained form a solar panel.” The fuel savings would be from two primary mechanisms, he said. First, the hydrogen mixed with fuel will improve the combustion efficiency; and second, part of the power will be from solar energy.

Sometimes in scientific research a negative result can be a positive, in that a process is determined NOT to work, so scientists can move on to other things. In this case, the research team determined that the on-board hydrogen booster needed more power to do its job than a small solar panel could provide, thus the concept of an on-board solar power booster does not seem feasible.

“According to our testing, generating the hydrogen needs high power, as high as 1,200 watts,” Zhang said. “The solar panel for creating this power would have to be much larger than the car, therefore it’s not feasible to use the solar panel to generate the hydrogen,” he said.

Although the research did not return the hoped for conclusion, the project was an important educational tool, requiring a team of graduate and undergraduate students to research a hypothesis, design and fabricate the needed devices, design and conduct experiments, and draw conclusions from their work.

“The project helped them in their learning, their research capability and understanding economics,” Zhang said. Chandra completed his master’s thesis based on the project. In addition, he will submit a paper to the Association of Technology, Management, and Applied Engineering 2013 Congress. A related solar power project was also presented at the 33rd Annual Central California Research Symposium in 2012.

For more information about automotive technology and potential research, contact Zhang at dazhang@csufresno.edu.

Partial funding for this project was provided by the California State University Agricultural Research Institute (ARI).