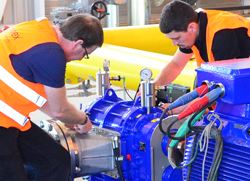 A small group of engineers, equipment manufacturers and water delivery specialists were gathered at Fresno State’s International Center for Water Technology (ICWT) last month to certify the performance of an energy recovery system never before used in the United States.

“This is a way of recovering energy that is normally lost in water delivery systems,” noted Sandy Walker, vice president of Zeropex Inc. in California. “Delivery systems typically build up large amounts of pressure required to move water over long distances. When the water reaches a delivery point, the system uses a pressure-reducing valve that burns off the excess pressure. This new system recovers the energy that is lost and generates electricity with it.”

The Zeropex power generation system is fairly simple: it features a turbine and generator installed in-line in the water system pipeline, plus a control system that monitors and delivers the electrical current.

“The basics of the system are basically off-the-shelf components,” Walker said. “The delivery and monitoring of the power was developed and patented by Zeropex.”

The Water and Energy Technology Laboratory (WET Lab) housed in the ICWT serves as an internationally recognized testing facility for all types of water technology equipment and delivery systems, noted Ed Norum, engineer for Fresno State’s Center for Irrigation Technology. The WET Lab is certifying performance of three Zeropex micro-generators before they are delivered to the company’s first two U.S. customers – the San Jose Water Co. and the City of Avenal.

Both San Jose and Avenal have water delivery systems that city engineers determined could benefit from micro-hydro, Walker said. Once installed, the units will return a constant amount of electrical power back into each city’s operating grid, providing renewed energy that up until now has been lost.

According to Norum, representatives from the company contacted Fresno State because of the WET Lab’s status as a recognized testing facility.

“We’re absolutely the ideal facility for the need that they have,” Norum said, providing calibrated certification that the equipment will do what it’s designed to do, prior to it being delivered to customers. 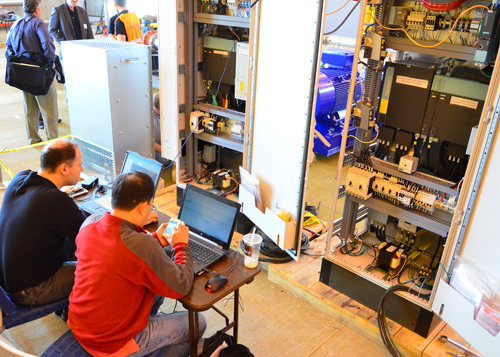 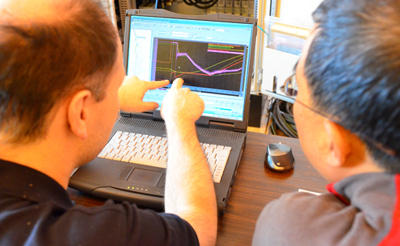 Engineers in above photo monitor panels controlling electrical flow from generator behind. At left, closeup of software monitoring program.

Zeropex micro-hydro systems have been purchased and installed in several European countries including Norway and the United Kingdom. Walker said she hopes Zeropex will be able to respond to the growing market need for renewable water energy technologies in this region.

“In-conduit micro-hydro is an emerging field that offers some unique benefits for California,” she said. “It combines the ability to deliver reliable constant power to the electric grid while being a cost effective renewable energy source.  In addition, it eliminates the risks associated with fossil fuels like natural gas and oil, and it is an invaluable tool for water agencies to reduce their carbon footprint.”

Walker expressed her appreciation to Fresno State for the opportunity to conduct commercial scale testing at the WET lab. “Our experience here has been world class,” she said.