A newly-constructed dust tunnel on the Fresno State campus is set to enable research that will help improve air quality in the San Joaquin Valley and throughout California.

The tunnel will be used to measure the effects of water misting as a means of controlling particulate matter that rise into the air through agricultural field operations. 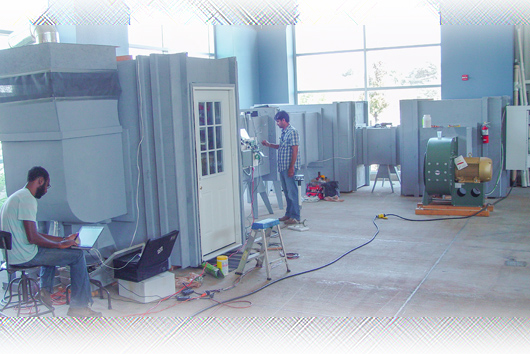 “The main objective of this project is to investigate the efficacy of a dust plume suppression system in lab conditions,” Alexandrou said in outlining his work.

Dust raised by operations such and disking, cultivating and harvesting carries various sizes of particles, called particulate matter (PM), which can be harmful to humans when inhaled. PM control in the agricultural industry has been a focus of both local and state air pollution control agencies over the years, Alexandrou noted.

Particulate matter is categorized by size. A PM10 particle has an aerodynamic diameter of 10 microns (millionths of a meter), or about one seventh the diameter of a human hair. Smaller-sized particles, such as PM2.5, can be more harmful to humans because they are not trapped by our natural filtering systems and end up lodging in the lungs, where they can cause asthma and other respiratory diseases. 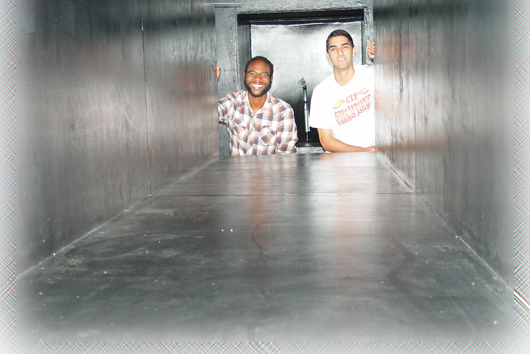 “Our project is investigating whether cooling the microclimate around the area where dust is generated, using water mist, can reduce the amount of regulated particulate matter emitted,” Alexandrou said. When air containing the dust is cooled, it tends to fall, causing the PM to settle back down to the ground. “We think that misting has the potential of becoming a conservation practice in the valley,” the researcher noted.

Over the last two years the project team has collaborated with a local industry partner to test a modified disk designed to spray a water mist over the implement during operation. The problem, from a scientific perspective, was the lack of control in field conditions.

“By the time we set up to start the mist and measure the effects, the temperature changes or the wind shifts, changing the whole dynamic of the experiment,” Adhikari said.

In order to achieve reliable scientific data as to the effects of misting on particulate matter, the team determined that they would have to move into a laboratory setting, where factors such as temperature, wind speed and direction can be controlled.

With no wind tunnel of appropriate size located on the Fresno State campus or even in the region, they were forced to contract with Texas A&M University, to use a tunnel on that campus. A series of tests provided preliminary data on the effects of different sized mist droplets on PM particles. However, the long-distance travel and work became so costly and time-consuming that the team decided, with the support of area industry partners and funding organizations, to build their own tunnel right here on the Fresno State campus.

“The tunnel is based on the Texas A&M tunnel as described in the literature and offers a high degree of automation, which allows the system to start, stop and record each event automatically avoiding human error,” Alexandrou said. “The design allows the research team to add various devices and to monitor the particulate matter using a variety of instruments.”

“The interest for the agricultural industry in this work is significant, since the project may provide us with a technique to reduce fugitive particulate matter emissions during disking operations,” Alexandrou said.

“In constructing a wind tunnel with the capability of monitoring PM10, PM2.5 and TSP (total suspended particulate) particles using EPA certified samplers, we have developed a regional resource for research and development activities for air quality research,” he added.

The wind tunnel is housed in the large open laboratory area of the International Center for Water Technology, located on the eastern edge of the campus at Barstow and Chestnut avenues. The tunnel boasts a 40HP three phase VFD electric motor with a blower capable of generating wind speeds up to 25 miles per hour in a three-by-three foot square tunnel.

“It feels like a cyclone in there at top speed,” Adhikari quipped

One end has an injector capable of injecting mist droplets of various sizes. The other end contains a vacuum pipe for sucking in air samples, which then pass through a paper filter system that can record the amount of PM in the sample. Two additional instruments ­– a forward looking infrared camera (FLIR) and an optical particle sizer (OPS) – are going to be used simultaneously to measure the concentration of the PM.

Final adjustments are being made on the operational electronics of the tunnel this fall, with trials set to begin soon after. Experimental work and data recording will continue over the next year.

Collaborating agencies in the field work is the University of California. Partial funding came from the California State University Agricultural Research Institute (ARI). 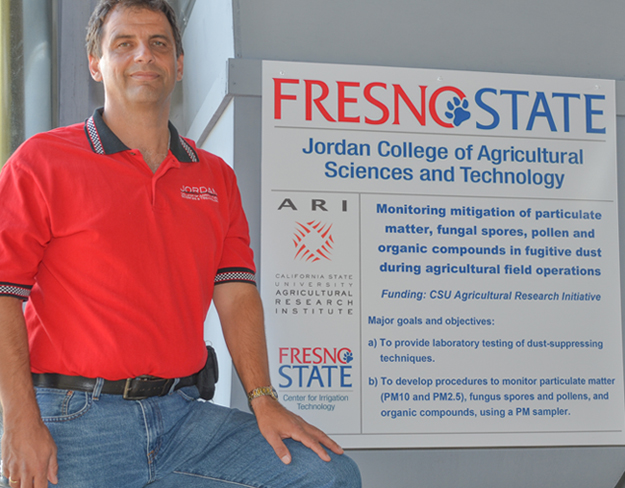