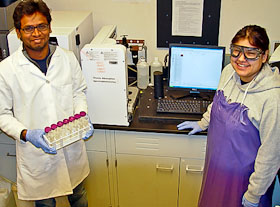 Fresno State students from a variety of academic disciplines are gaining hands-on experience in research methodology and laboratory work at the newly equipped Graduate Laboratory operated by the Jordan College of Agricultural Sciences and Technology (JCAST).

A $245,000 grant awarded by the U.S. Department of Agriculture under its Hispanic Serving Institution (HSI) program has enabled the purchase of more than half a dozen major pieces of analytical equipment for the laboratory. These include a $50,000 atomic absorption spectrophotometer that performs elemental chemical analysis on soil and plant extracts and a $25,000 microwave digester that safely digests plant tissue in acids for the analysis of macro- and micronutrients.

The grant not only provides students with the opportunity to operate this analytical equipment, but it also increases the scope of our thesis research projects, especially those not covered by research grants, Benes said.

In-house analysis conducted by the students saves money (since one research project can require more than 1,000 chemical tests) and also gives both graduate and undergraduate students the opportunity to become adept and confident with many types of research lab operations, Benes noted.

Two students who have benefited from the equipment acquisition are Prasad Yadavali and Janet Robles. Prasad is completing dual master s degrees in plant science and in biotechnology. Two years ago he joined a campus research team studying the effects of calcium fertigation and soil acidification on quality of processing tomatoes grown on salt-affected soils in the western San Joaquin Valley.

That project, partially funded by the California State University Agricultural Research Institute (ARI) was led by research scientist Florence Cassel Sharma and assistant plant science Professor Dave Goorahoo. Prasad began as a paid research assistant and found the work so challenging that he proposed to focus on the experiment for his master s thesis project.

Janet is an undergraduate student who has benefited from the research project and equipment acquisition. In fact, Janet s participation was a focal point of the original USDA grant, which is to help support and expand opportunities for Hispanic students.

A junior majoring in business, Janet has found employment and extensive field and laboratory experience since joining the research team with Cassel Sharma and Goorahoo two years ago.

We re the ones (students) who do most of the lab work, organizing and preparing the samples for testing, she said. We prepare samples of leaves, soil, and harvested tomato for drying, and then the plant samples are digested in the microwave digester and analyzed for sodium and calcium using the atomic absorption spectrophotometer. 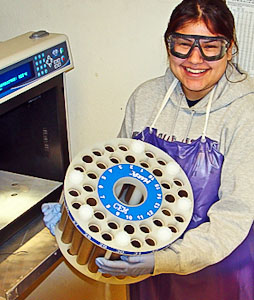 Janet has assisted with laboratory experiments for several research projects. For just one project, she assisted Prasad in organizing and preparing 3,000 soil samples for analysis, along with 500 each of leaf and fruit samples. She averages 20 hours a week working in the lab during academic semesters. During the past two summers she also averaged 40 hours a week in the field, joining the research team to collect all the samples.

Janet has become a veteran in sample testing and analysis and in laboratory protocols. She says that it should help her as she is considering putting her business skills to work for the USDA after graduation. I think that my help as a researcher would help with a career in international business, she said.

The new equipment at the Graduate Laboratory has provided learning and training opportunities for Fresno State students in several academic disciplines, including plant science, animal science, food science, and viticulture and enology. It has also enhanced the graduate Laboratory Techniques class by replacing obsolete lab equipment.

Our Graduate Laboratory serves as a central analytical facility providing advanced training for both undergraduate and graduate level students, Benes noted. The USDA grant is serving its purpose in that it has provided enhanced analytical capacity for graduate research as well as providing opportunities for Hispanic undergraduate students to work in research. This experience will prepare them for solving food and agricultural problems facing the agricultural industry in California s Central Valley, she said.

The equipment also has enhanced the ability of the Jordan College of Agricultural Sciences and Technology to attract high quality students to its graduate programs.

We are particularly grateful for the support letters provided by industry (Richard Matoian, Pat Ricchiuti, William Smittcamp and Jim Zion) and researchers at UC Kearney (Drs. Jeff Mitchell, Scott Johnson and Walt Bentley) and USDA-ARS (Drs. Gary Banuelos and James Ayers). These letters undoubtedly strengthened the grant proposal and helped us to secure the grant, she said.