A Fresno State molecular geneticist is leading a research effort to determine if poplar trees could serve as a bioremediation crop to help reduce concentrations of saline irrigation water in California s western San Joaquin Valley.

Biology Professor Jim Prince has drawn together a team of Fresno State students, as well as research scientists from California State University, East Bay, the U.S. Department of Agriculture, and a Swiss research institute to examine the DNA of various poplar species to learn how poplars tolerate irrigation water high in salt and boron. 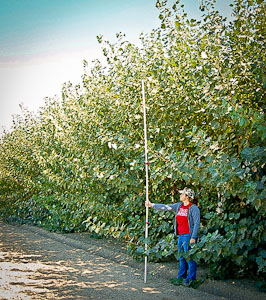 A typical West-Side IFDM system consists of four adjoining blocks: In the first a high-value non-salt-tolerant crop such as vegetables is grown using high-quality irrigation water. Drainage and tail water from the first block (which has accumulated higher salt concentrations) is pumped to a second block to irrigate a crop such as a forage grass with less market value but more tolerance to the lower quality water. Drainage water from that block is used in a third block, where a highly salt-tolerant crop such as saltgrass, or perhaps poplar trees, would be grown. The drain water from there is then pumped into an evaporation pond.

Growing poplar trees in IFDM systems would significantly benefit California agriculture because poplar is used for a broad range of products including veneer, lumber, plywood, pulp, paper products, even biofuel, Prince noted. Harvest of such trees able to tolerate and accumulate trace amounts of salt and boron can reduce contaminant concentrations in the local ecosystem.

Successfully growing poplar in an IFDM system requires screening of genetically distinct genomic groups and clones in order to identify those that are more tolerant of poor quality water and/or able to safety accumulate high concentrations of salts and toxic trace elements in their above-ground biomass.

Prior research conducted by the USDA has indicated that certain poplar species can tolerate adverse conditions, but it isn t clear which hybrids have the greatest tolerance capacity. That s where the need for molecular study comes in.

Using gene-mapping technology in the laboratory, graduate student researchers under Prince s guidance are screening poplar hybrids to discover DNA markers linked to the desired traits. This will bring understanding of the genetic basis of tolerance to high salts and provide a tool to identify only those most promising hybrids to be cloned and released for field trials.

USDA researchers led by soil scientist Gary Ba uelos are managing the salt-tolerance phenotyping studies at the Agricultural Research Service facility in Parlier, east of Fresno. At CSU East Bay Assistant Biochemistry Professor Danika LeDuc and her students are discovering proteins that are expressed in response to high salt stress in poplars. And at the Swiss Federal Institute for Forest, Snow and Landscape research, Dr. Pierre Vollenweider is trying to discover if the salts are stored inside of poplar cells. These avenues of work will all come together to provide a picture of how poplars resist high sodium and boron.

Prince expects results and analysis to be completed next year.

The employment of such water re-use projects will ultimately lead to a reduction in the volume of poor water quality irrigation and drainage waters, decreasing their impact on California s environment, wildlife, and farming communities, he said.

Partial funding for this project was provided by the California State University Agricultural Research Institute (ARI). For more information, contact Prince at jamespr@csufresno.edu.