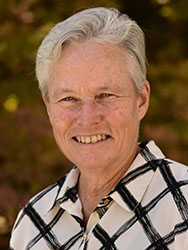 Biography: Dr. Sharon (Sherri) Freeman joined the Fresno State animal sciences and agricultural education faculty at California State University, Fresno in August of 2019. She is excited to return home to her birth city and share her passion for agricultural education, continue her research, and create impactful student learning opportunities.

She had previously served at Cal Poly since 2015 as an agricultural education lecturer, supervisor of its student teachers, and adviser for its agricultural ambassador program. During that time, she also completed her doctoral degree, which included a research emphasis on soft skill development for high school agricultural students.

She started a joint doctoral program through Texas A&M and Texas Tech University in 2013. At the same time, she taught agricultural courses at West Hills Community College (Coalinga), and instituted several hands-on learning projects, such as a vegetable farming enterprise and local farmers market booth.

For the 18 years before, she oversaw the creation of the agricultural education program, FFA chapter, and other curricular pathways at Warner High School (Warner Springs) starting in 1995. The successful program received the “Program of Excellence” award through the California State Department of Education and the “Golden Bell Award” through the California State School Boards Association. Students were instrumental in creating an outdoor education program; establishing an on-campus farmer's market to sell eggs, vegetables, and student-made items; and completing a host of successful projects (livestock breeding, oak tree restoration, vineyard, garden, and mechanics projects).

Early in her tenure at Warner Springs, she also received her master's degree in agricultural sciences from Cal Poly Pomona.

Born in Fresno, she grew up mostly in the Imperial Valley and graduated from Imperial High School in 1979. Her love for agriculture was inspired by riding horses, moving cattle, driving tractors, and irrigating crops after school and on the weekends. She became an active FFA member, showed livestock, competed in parliamentary procedure, and served as a club officer.