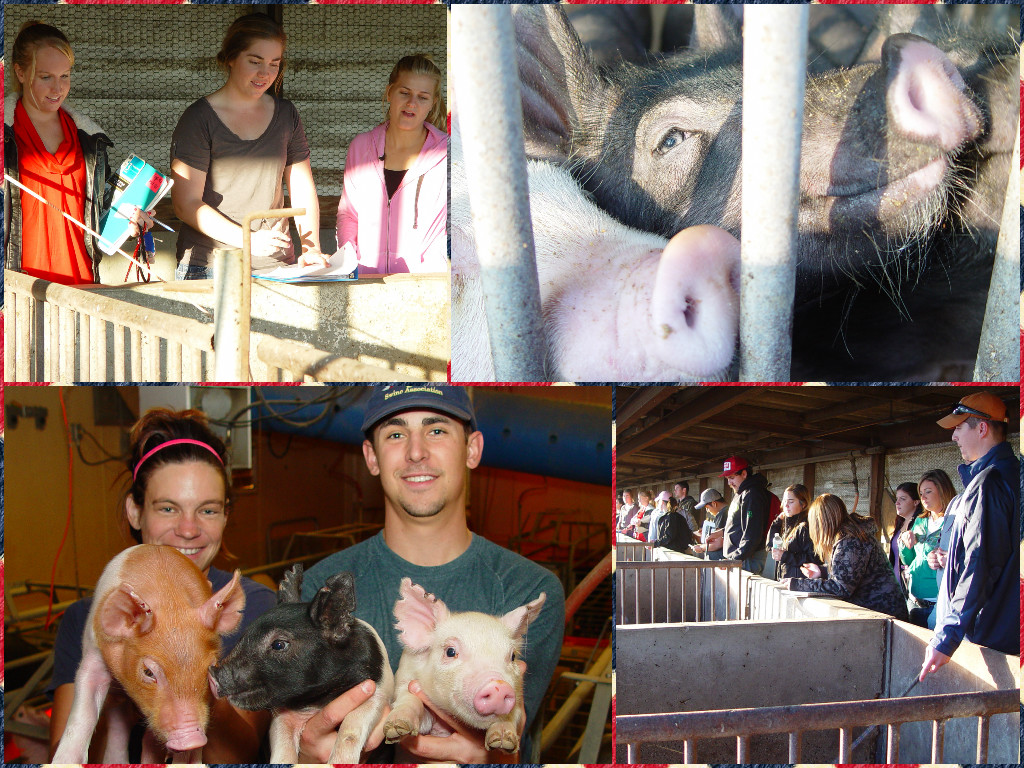 The California State University, Fresno Swine Unit usually has 450 to 500 pigs of all ages. There are about 100 sows and 8 boars. The rest are young pigs. The typical weight of an adult pig is approximately 500 to 650 pounds.

A sow is a mature female that has had one or more litters of baby piglets. A young female that has not had any piglets is called a gilt. A boar is a mature male that is used for breeding. A barrow is a castrated male pig that will be used for meat and ideally weighs no more than 270 pounds.

The Swine Unit maintains four major breeds of pigs. The Yorkshire breed is all white with erect ears. The Landrace is another all white breed but it has long droopy ears. The Hampshire breed is primarily black with a white belt around its midsection. The Duroc is all red. The Yorkshire and Landrace hogs are known more for their maternal ability, while the Hampshire and Duroc breeds are used for meat.

Almost all breeding at the Swine Unit is by artificial insemination (AI). Our own boars are collected and semen is used at the unit or sold to other hog producers. After a sow is bred, she is kept in the outside pens until approximately 5 days prior to farrowing or giving birth.

A sow’s gestation is 114 days, or 3 months, 3 weeks and 3 days. There are two farrowing houses, which house about 12 sows each. Sows are placed in crates in the farrowing house to reduce chances of crushing a piglet by laying on them or stepping on them. A sow averages about 10 piglets born per litter, with a range of 6 to 14 piglets. Piglets weigh approximately 2 to 4 pounds at birth and will double their weight the first 3 weeks of life. While in the farrowing house, the sow is fed twice a day and given free access to clean, cool water.

Piglets nurse frequently and start to eat regular pig feed at 10 days of age. The piglets are also processed, meaning they receive ear notches for identification and their tail is docked to prevent other hogs from biting the tail. They also receive an iron shot and have their needle teeth clipped. Sows and their young remain in the farrowing house for approximately 4 weeks. The pigs are weaned and placed in the nursery. The sow is taken back to the outside pens and will be bred again in 5 to 7 days.

The pigs remain in the nursery for 4 to 6 weeks and are then moved to the outside barns. It is important to keep pigs in pens with similarly sized hogs. Pigs are ready for market when they reach about 230 pounds in about 6 months.

The Fresno State Swine Unit feeds the pigs a diet of mostly corn and soybean meal. They also receive vitamins and minerals. Pigs are fed several different diets throughout their different stages of life to accommodate their rapid growth.

Pigs are a unique animal in that they do not have the ability to sweat. This makes the pig very vulnerable to heat stress or even death when it is hot. The pigs are kept cool by water misters, shade or mud. In the winter, the pigs rely on their own body fat and their ability to snuggle up with pen mates to keep them warm. Shavings are also added in the winter for extra insulation.

The pig pens at Fresno State are mostly concrete because it is a healthier environment for the pigs. The pens are washed daily to protect the pigs from disease and parasites. This management practice also reduces the odor of the unit.