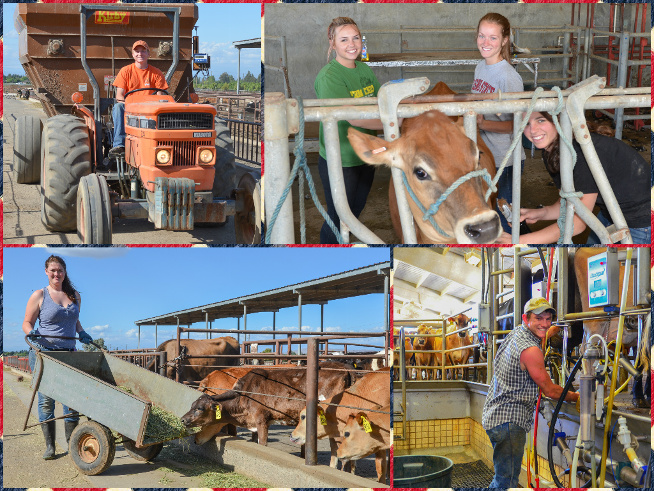 The California State University, Fresno Dairy Unit maintains two different breeds of dairy cattle, the Holstein and the Jersey. There are approximately 275 to 300 cows here and about 150 of them are used in the milk string. Each cow in the milk string is milked twice a day and seven days a week, with no exceptions to holidays. Milking is at 2:00A.M. and 2:00P.M. each day.

The Holstein breed is black and white in color. A mature Holstein will weigh 1,600 pounds or more and their milk contains about 3.5% butterfat. Their calves will weigh about 85 pounds at birth. One Holstein cow can produce 10 to 12 gallons of milk a day. This breed originated in the Netherlands. Hollander and Dutch settlers first brought them over to the United States in 1795.

The Jersey breed originated on the Island of Jersey which is off the English coast near the coast of France. Jersey cattle are fawn in color with a black muzzle and usually a dark switch on their tail. Mature Jersey cows weigh about 1,100 pounds and their calves weigh about 50 pounds at birth. Jerseys are smaller framed than Holsteins, but they are very well known for their high percentage of butterfat in their milk. A Jersey cow can produce 8 to 10 gallons of milk a day with a butterfat content of 4.5% to 5.5%.

The dairy cows are fed two times per day. Feed intake is very important for dairy cows to promote the production of milk in the cow and provide her with the proper nourishment to produce a greater volume of milk. Dairy cattle primarily eat alfalfa hay and corn silage. All of the milk string is fed a concentrate which can be composed of such things as: rolled corn, barley, protein pellets, cottonseeds and molasses. It is also very important to provide dairy cattle with plenty of fresh, clean and cool water.

During the summer months, water misters installed in the barn help keep the cows cool and comfortable. If the cows get overheated, their milk production volume decreases significantly.

All the dairy cows at the Dairy Unit are bred by artificial insemination (AI). Semen is purchased from sire selection companies from all over the United States and shipped here. A dairy cow’s gestation is 9 months. At the end of the 9 months when the cow is close to calving, she is moved to a pen to have her calf. Students are there to assist her if necessary.

Dairy calves are kept with their mother for at least 2 hours to allow the calf to drink the colostrum, or antibody rich first milk. The cow is then moved to the milk string barn. The calves are kept in individual hutches to protect them from spreading diseases to one another. The calves are fed milk-replacer and grain, twice a day. Fresh water is available to them at all times. The calves move to small group pens when they are 2 months old. The heifer calves, or young females that have not been bred, are kept as replacements for breeding and the bull calves are sold.

During milking, cows are brought up to the milk parlor one pen at a time. They enter an area with low, warm water sprinklers that clean off their underside, feet and legs. Next, they move to the individual milking stall where their teats are cleaned again. Then, the milk machine is placed on the teats and it automatically milks the cow by suction. After about 5 minutes, the machine will shut-off automatically. The cow’s teats are cleaned and she is released back to her pen. Each milking period takes about 6 hours from set-up to clean-up. All the milk is cooled and goes to a large storage tank. It stays there until the milk truck comes to pick it up. Fresno State uses about 1/7th of the milk for production at the Fresno State Dairy Processing Plant and the rest is sold to a local dairy processing company.