Corn row spacing and population in a no-till system 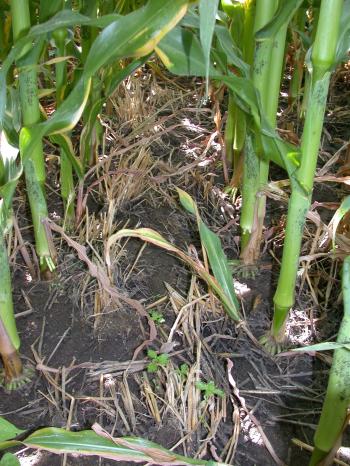 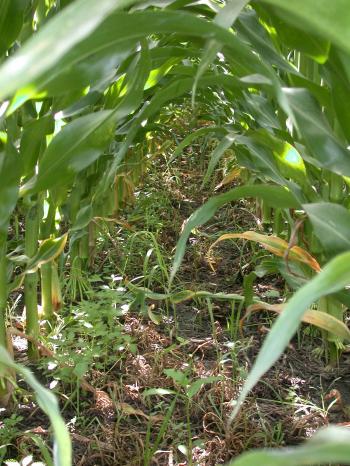 Silage corn (Zea mays L.) has traditionally been planted on 76- or 96-cm beds in central California to enable furrow irrigation, inter-row cultivation, and pesticide applications. However, with border flood irrigation in the no-till systems and the use of aerial pesticide applications, the distance between rows can be narrowed. Narrower rows may help suppress pests compared to wider rows because of earlier canopy development and associated shading under the corn canopy. An on-farm study was conducted in Tipton, CA in 2004 and 2005 to evaluate the effect of two row spacings (38- vs 76-cm) and three populations (69000, 86000, and 104000 plants ha-1) on weeds, insect, and crop yield. Corn 'cv. DK C66-80' (glyphosate-tolerant) was no-till planted in May. Glyphosate was applied in June @ 2 l ha-1. Weed and insect (corn leafhopper, aphid, and leafminer) populations were sampled. Light interception by the corn canopy was measured weekly. In both years, the 38-cm rows intercepted more light earlier in the growing season and closed canopy about 6-13 days earlier than the 76-cm rows. Weed densities were similar between the 38- and 76-cm rows in 2004. In 2005, weed densities were greater in 76- than 38-cm rows. In both years, weed biomass was greater in the 76- than in the 38-cm rows. Plant population generally had no effect on weed densities or biomass. An inverse relationship existed between insect density and row spacing/plant density throughout the growing season. Aphid densities in plots with the highest plant density failed to reach treatable levels. In both years corn stalk diameter was larger, for the same population, in the 38- than in the 76-cm rows. Corn yield (adjusted to 70% moisture) was similar for 38- and 76-cm rows. This study showed that row spacing/plant density could be used as IPM tools in corn production.