Institute for Food and Agriculture

FEATURING: The 41st Annual Agribusiness Management Conference, “Post-pandemic Challenges in California Agriculture” will focus on supply chain issues and the inflationary environment. The program will host an array of industry experts who will address critical agricultural concerns. 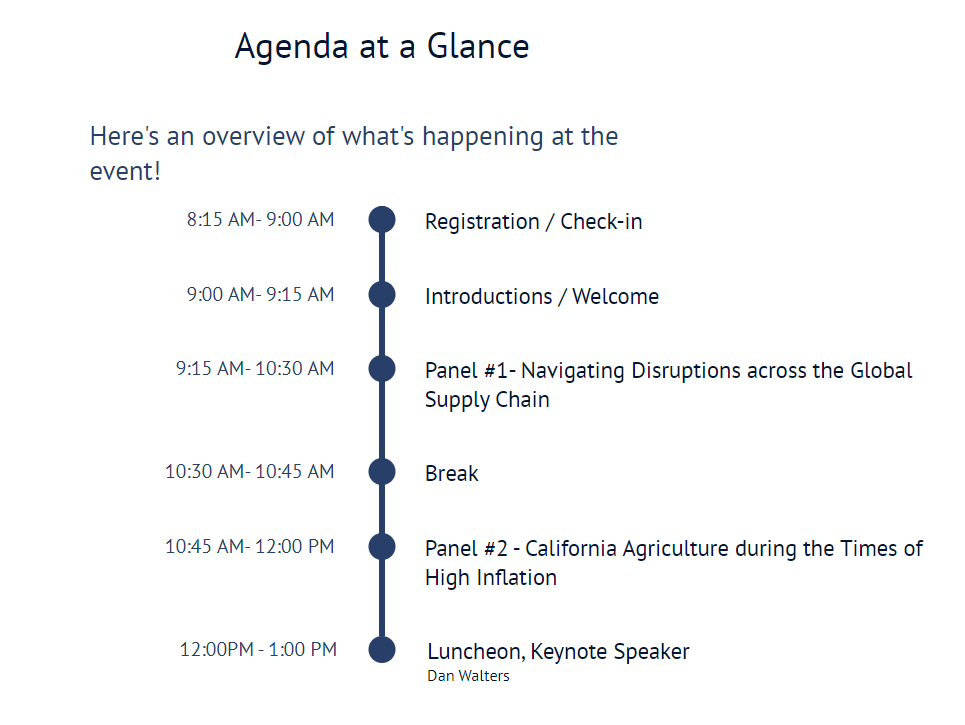 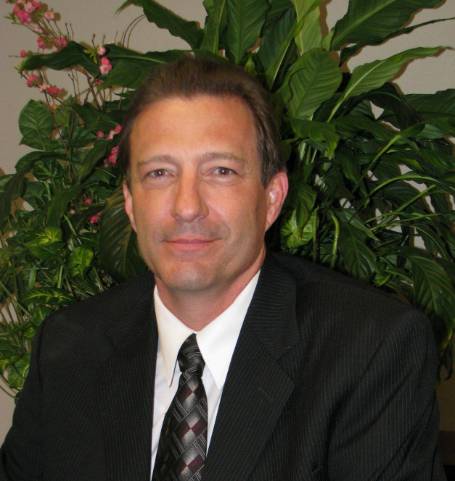 Tony Boren is the Executive Director of the Fresno Council of Governments, where he is responsible for administration and
management of agency budget and staff as well as program and policy development, intergovernmental relations, supervision
and control of all work activities at Fresno COG such as those related to Measure C implementation, and the California
Transportation Commission. Prior to tenure with COG, Tony worked for the City of Fresno for eight years in Land use Planning,
Development Services and Annexations. 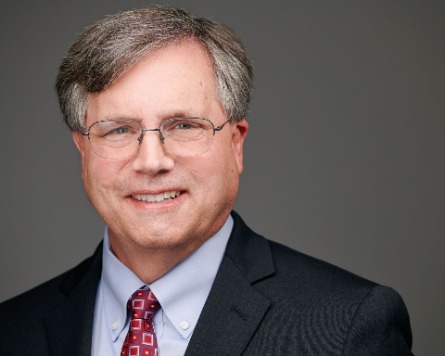 John McLaurin is President of the Pacific Merchant Shipping Association (PMSA).  With offices in Oakland, Long Beach and Seattle, PMSA is a west coast maritime trade association representing ocean carriers and marine terminal operators on a variety of local, state and federal issues.  Mr. McLaurin has been with PMSA in his current role since 1995.  In addition to PMSA, Mr. McLaurin has also worked for the Marine Spill Response Corporation, American President Lines and the American Petroleum Institute.

Mr. McLaurin has a Bachelors Degree in Political Science Public Service from the University of California at Davis and a law degree from Southwestern University School of Law. Mr. McLaurin has previously served on the Board of Regents of St. Mary’s College in Moraga, CA; the California Oil Spill Technical Advisory Committee; Board of Directors of the San Francisco Marine Exchange; member of the Seamen’s Church Institute Development Committee; San Ramon Valley Unified School District Special Education Task Force; Board of Directors of the PMSA Foundation; volunteer/fundraiser for Autism Film Camp.  He was a recipient of the 2013 Connie Award and honored in 2018 by the Seafarers Center of Los Angeles/Long Beach.

Married to Lisa Green McLaurin, they have two daughters.  Mr. McLaurin has been involved in a variety of efforts and programs dealing with special education for children and adults with autism. 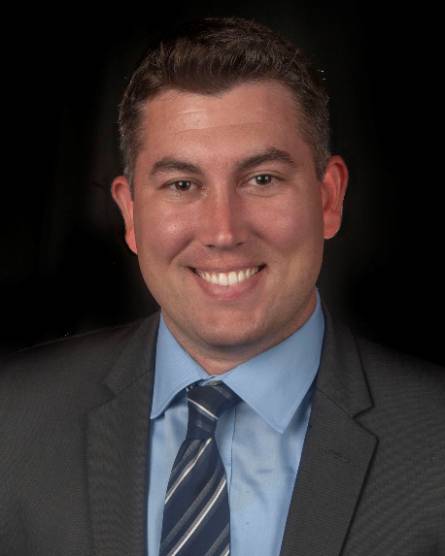 Moderator: Ian Lemay A lifelong resident of the San Joaquin Valley, Ian LeMay has always been a passionate advocate for his community and strives to make it a better place to live. Ian’s enthusiasm for his community stems from his parents’ influence – they instilled a sense of responsibility and stewardship for the community that Ian has always carried with him. He earned a Bachelor’s Degree in Agriculture Business from California Polytechnic State University, San Luis Obispo.

From February 2011 to January 2015, Ian served as the District Director for Congressman Jim Costa who represents the 16th Congressional District, which includes portions of Fresno and Madera Counties and all of Merced County. In his role, Ian advised the Congressman on a number of issues, including agriculture, water, and transportation. Ian was responsible for ensuring that the Congressman’s Merced and Fresno staff were equipped to perform to the best of their ability.
Prior to working for the Congressman, Ian worked as a California Market Specialist for the Lindsay Corporation, an agricultural equipment manufacturer.
Ian currently serves as the President for the California Fresh Fruit Association. The Association is a voluntary public policy organization that works on behalf of its members – growers, shippers, marketers and associates – on issues that specifically affect member commodities: fresh grapes, kiwis, pomegranates, cherries, blueberries, peaches, pears, apricots, nectarines, interspecific varieties, plums, apples and persimmons. It is the Association’s responsibility to serve as a liaison between regulatory and legislative authorities by acting as a unified voice for their members.
Ian and his wife Molly were married in October of 2011 and currently live in Fresno. They have
been blessed with three children, Emery, Ellison, and Aiden. 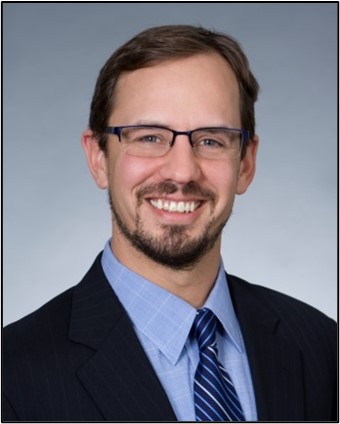 Tanner Ehmke is a Lead Economist for Dairy Production and Processing at CoBank’s Knowledge Exchange research team that provides market and industry outlooks on sectors affecting the rural economy, including grains, oilseeds, biofuels and farm supply; animal protein; dairy production and processing; specialty crops; and power, energy and water. Prior to joining CoBank in 2015, Tanner farmed and marketed seed for his family’s seed company in western Kansas where his family homesteaded in 1885. He previously was a commodities analyst at AgResource Company in Chicago, a markets reporter for Dow Jones at the Chicago Board of Trade, and an agricultural journalist covering crop production and farm business management. Tanner holds a bachelor’s in Agricultural Economics and a master’s in Agricultural Business, both from Kansas State University. 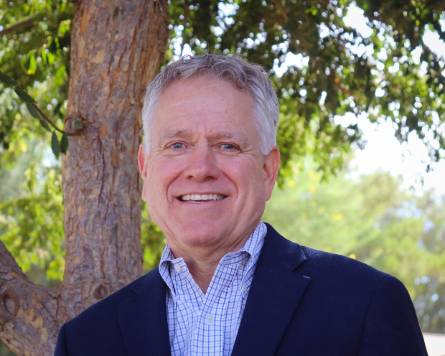 Rob Yraceburu joined Wonderful Orchards in May of 2015 as the Chief Operating Officer and was named President of Wonderful Orchards in November 2015. He is responsible for management of the company’s administration and operations, including management of 100,000 acres of pistachios, almonds, pomegranates and wine grapes. He is also responsible for oversight of Wonderful Bees, one of the largest bee companies in the US providing over 50k in hives for almond pollination and Wonderful Nurseries, which is the largest grapevine nursery in North America, serving the Wine, Table Grape & Raisin industries. They are also one of the largest Pistachio Tree nurseries in North America, producing our proprietary Wonderful Pistachio Rootstock (WPR) as well as standard UCB1 rootstock trees from seed.
Prior to his employment with Wonderful, Rob was an Executive Vice President and head of Wells Fargo’s National Food & Agribusiness Division. He currently serves as President of the Westside Water Authority and of Belridge Water Storage District. In
2013, Rob was a Distinguished Leader Award Recipient from California Agricultural Leadership. In 2014, he received the Fresno State University Alumni Association Top Dog Award for Distinguished Alumni representing the School of Agriculture.
Rob graduated from Fresno State in 1984 with a Bachelor of Science degree in Agricultural Business, specializing in plant science and finance. He continued his education and earned a Master of Science degree from Fresno State in Agricultural Economics in 1990. 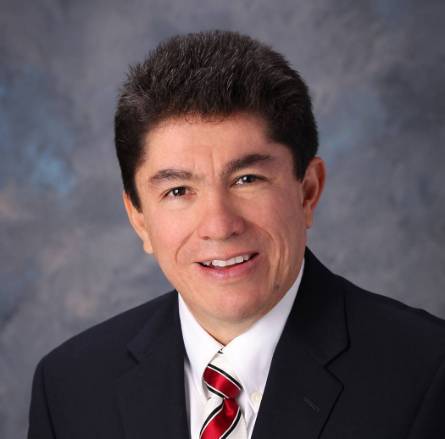 Moderator: Antonio Avalos is Professor of Economics at California State University, Fresno. In 2003, he earned a Ph.D. in Economics from Oklahoma State University with specialization in Economic Development and International Economics. His areas of expertise also include Forensic Economics, Economic Impact Analysis and Political Economy of Latin America. In 1998 he was appointed Herman Kahn Fellow at the Hudson Institute in Indianapolis, Indiana working for the Center for Workforce Development. In 2002, Dr. Avalos was selected by a panel of international economists to serve as a visiting scholar at the Andean Corporation of Development in Caracas, Venezuela, where he conducted applied research in international trade, economic development and labor markets in Latin American economies. Dr. Avalos has an extensive research and publication record in economic development, forensic economics and economic impact analysis. Over the last few years, Dr. Avalos has participated and presented his research at an assorted list of regional, national and international conferences, including countries such as Chile, Argentina, Cuba Nicaragua, Mexico, Italy, China, The Netherlands, Romania, England and others. Dr. Avalos currently serves as the Chairperson of the Department of Economics, in the Craig School of Business. 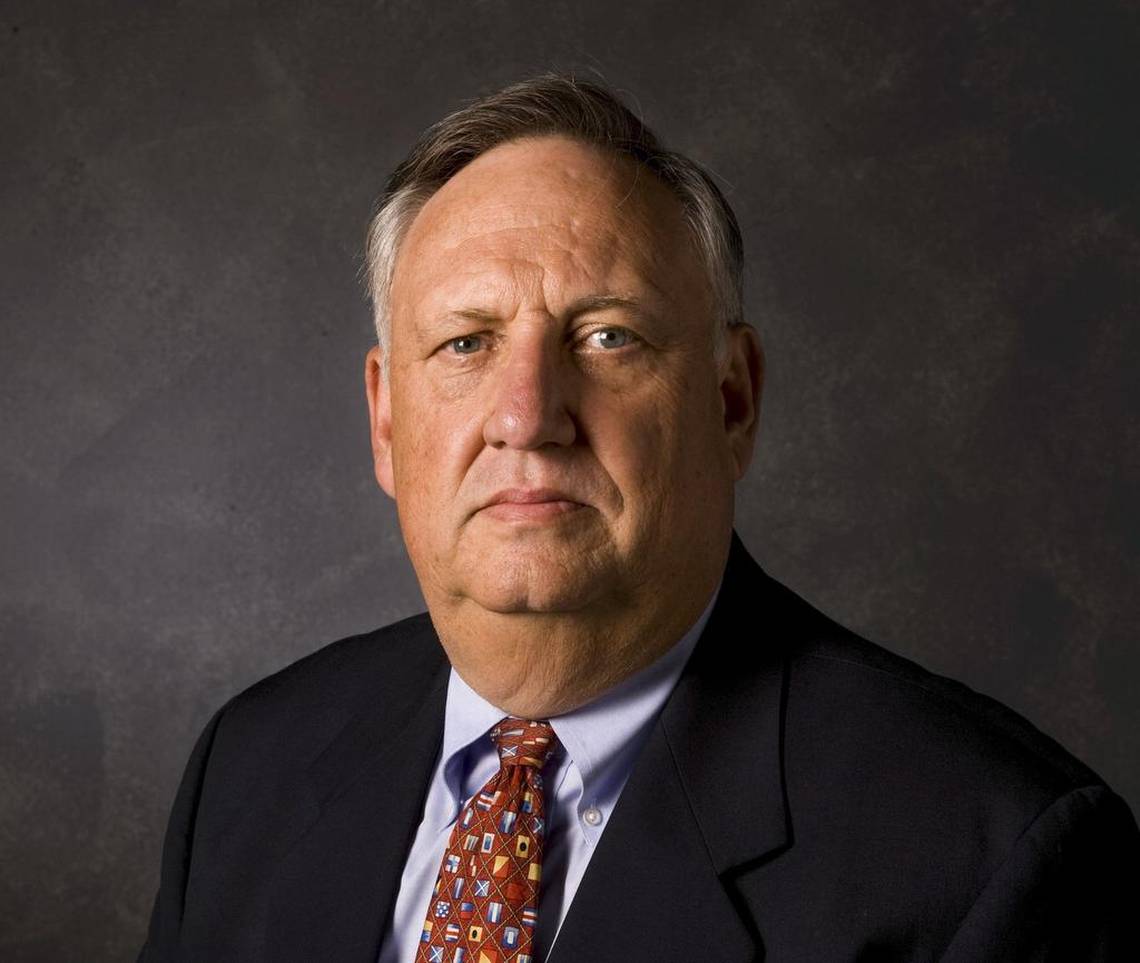 Dan Walters has been a journalist for nearly 60 years, spending all but a few of those years working for California newspapers. At one point in his career, at age 22, he was the nation’s youngest daily newspaper editor.

In 1984, he and the column moved to The Sacramento Bee and in 2017, Mr. Walters and his column shifted to CALmatters.org, a non-profit organization devoted to California public policy issues. He has written more than 9,000 articles and his column appears in dozens of California newspapers.

Mr. Walters has written about California and its politics for a number of other publications, including The Wall Street Journal, and in 1986, his book, “The New California: Facing the 21st Century,” was published in its first edition. The book later underwent revisions and became a widely used college textbook about socioeconomic and political trends in the state.

He is also the founding editor of the “California Political Almanac” and the co-author of “The Third House: Lobbyists, Money and Power in Sacramento,” published by the University of California. Mr. Walters frequently appears on CNN, Fox, and other networks, commenting about political developments in California.

All registered participants will recieve access to the resource folder. Email luzmendoza@csufresno.edu if you have not recieved access.

Thank you to all of the sponsors who made this event possible.